Skip to content
It was already some time that I had in mind the Lyskamm crossing, I thought it long and difficult, I feared it and so I wanted to achieve a great training to face it, then in 2018 I managed to realize this project and not only, I did even more than that or I was hoping because I did it in the day.

It was July 12, 2018 and I was accompanied by Roberto Ferraris, Guide of the Matterhorn.

We meet in Staffal at the start of the cable car, we go up to the Salt Pass and then to Punta Indren. We cross the Glacier of the same name, pass by the Mantua Refuge and then to gnifetti. The day is great, I am a bit anxious and instead Roberto is calm and quiet.

We begin to slowly climb the steep and crevasse glacier of The Lys skirting to the right the Vincent Pyramid and then pass the Balmenhorn rock on which the statue of the Christ of the Peaks was laid.

Once we reach the Colle del Lys we leave to the right the track that proceeds towards the Margherita hut and we head left to the base of the eastern Lyskamm where we give ourselves a short restorative break.

The east ridge begins, the slope increases, the pace slows down, you follow the track step by step, the ridge that gets steeper and sharper requires maximum attention and concentration, but the snow conditions are good.

We slowly climb with regular and steady pace, short pauses to look behind our backs to the east on the other tips of Monte Rosa: Vincent, Black Horn, Ludwig, Parrot, Gnifetti, Zumstein, Dufour, Nordend, the day is wonderful, there is no wind, great Visibility.

We still walk a long climb where in some sections the rock has emerged from the snow and with a last effort we reach the tip of eastern Lyskamm: in front of us the next destination, Roberto optimistically believes that the tour has practically succeeded, I am still doubtful, it still seems to me a long time, however the first goal is achieved and it recovers with enthusiasm. 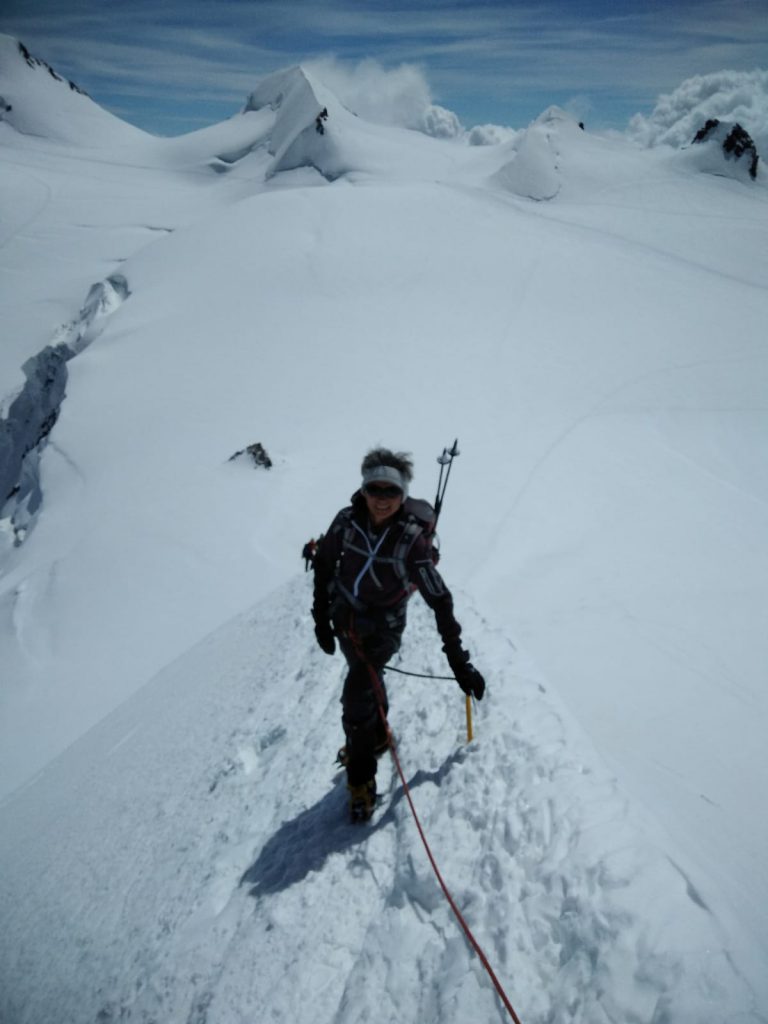 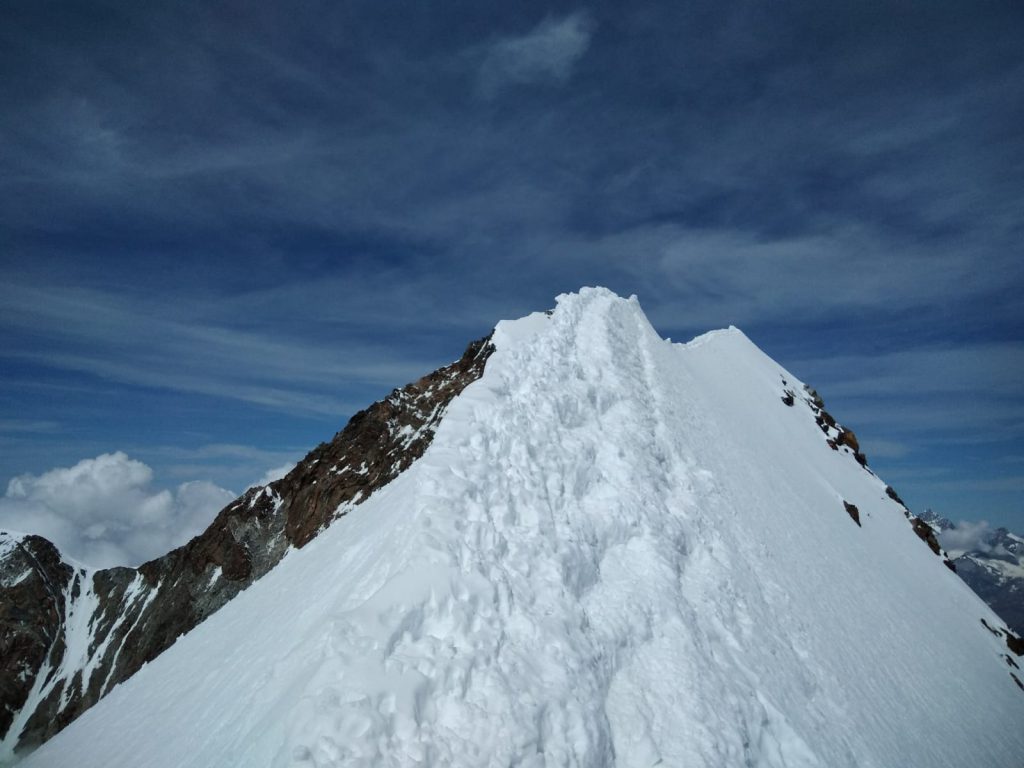 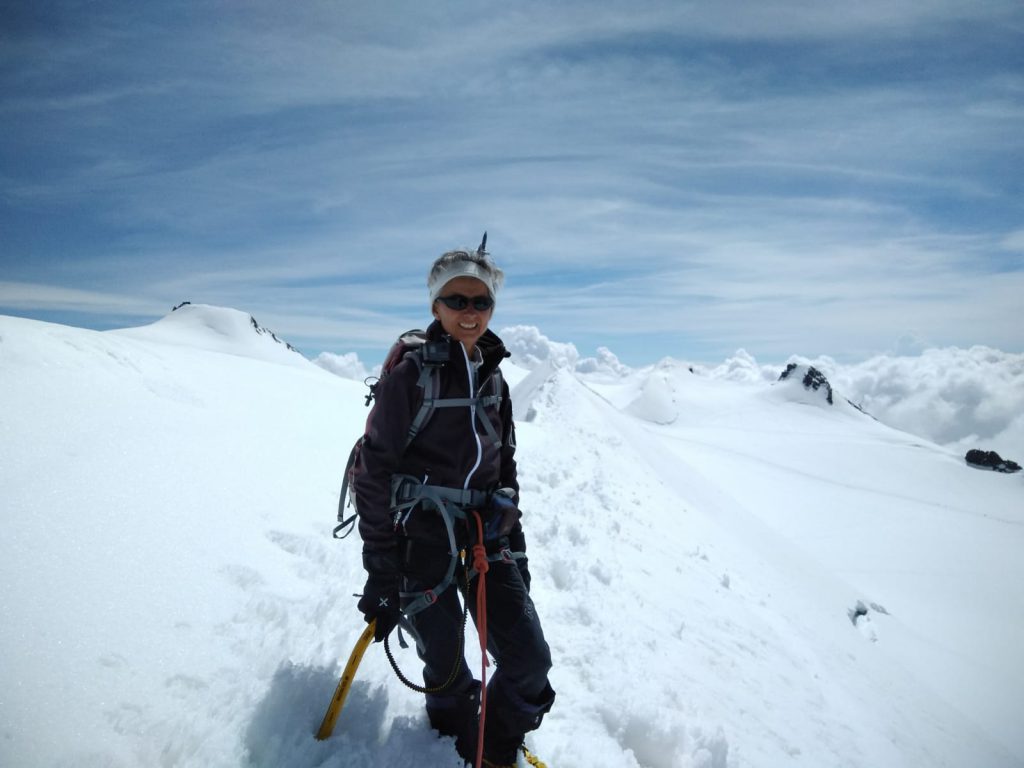 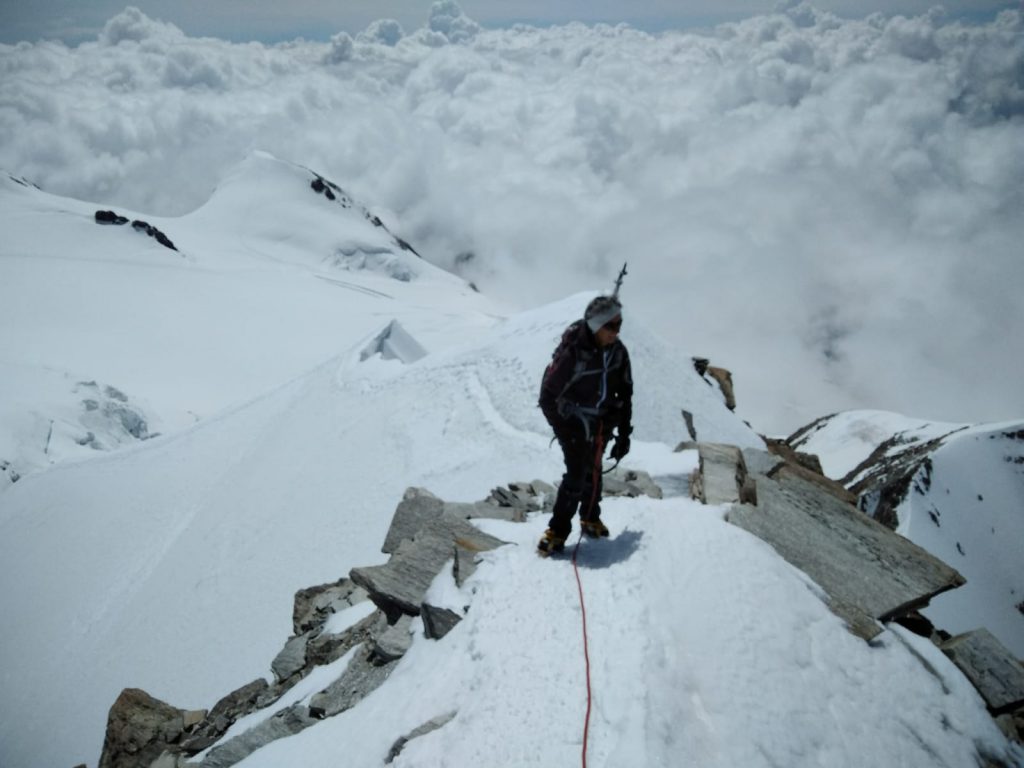 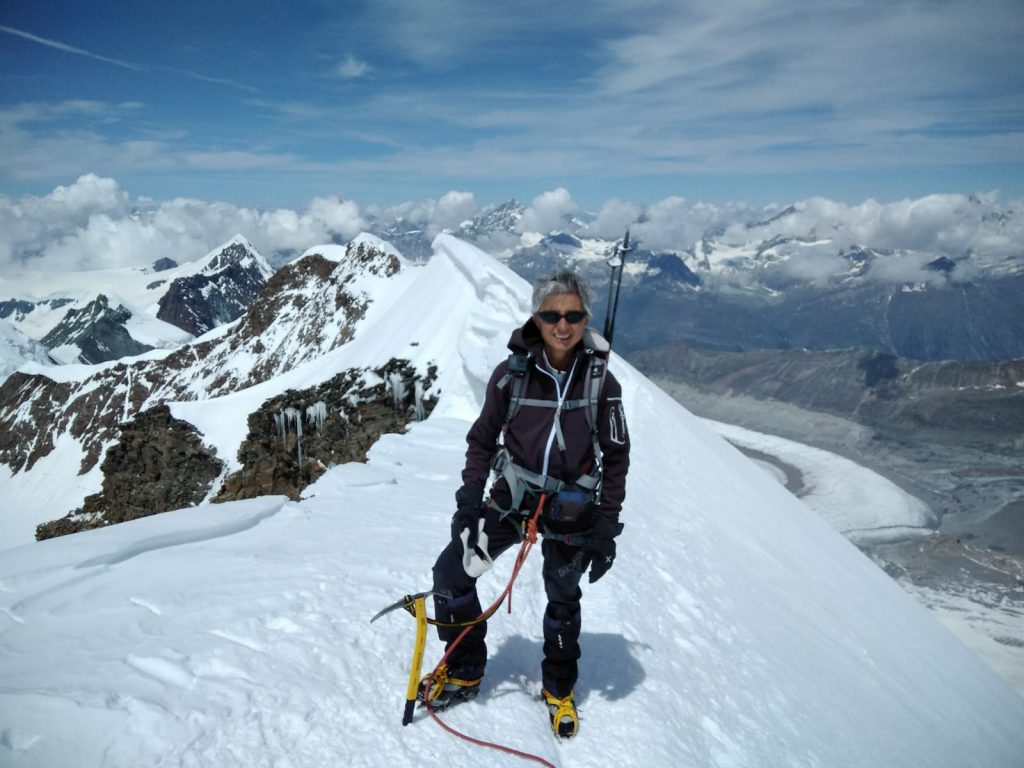 Down to the saddle that separates the two peaks, the path continues with a succession of ups and downs, now you pass to the right of the wire on the steep Swiss side of the north face reserved only for the most skilled ski mountaineers, now you pass to the left on the Italian side route from some spectacular mixed street.

The ridge is always very aerial and dizzying is mainly snowy but also has some stretches of rocks that make it varied and always fascinating.

The tension is always at its maximum for the exposure and the constant danger of the numerous frames.

Steep sections alternate with other less strenuous ones, then the ridge rises again and with short passages of II on mixture and rock we reach the summit of western Lyskamm.

Well, even the second goal is achieved, handshake and photos of the extraordinary panorama, you relax a moment to refresh, I want to enjoy and savor the moment taking some photos and admiring the landscape.

To the west the other tips of Monte Rosa with In the foreground Castore and Polluce that the fog is about to envelop.

Not being able to linger too long, we head west to descend along the steep and delicate western shoulder following the track that with regular steps and numerous turns takes us to the Colle del Felik and later to the Quintino Sella Refuge.

I begin to enjoy the success of this amazing tour as desired as it is feared.

After a short break to remove the crampons and redo the backpack, we resume the descent following the path equipped with ropes and a jumper that quickly leads us to the Bettolina pass where with the facilities of the Bettaforca we descend to Staffal to close the ring path. 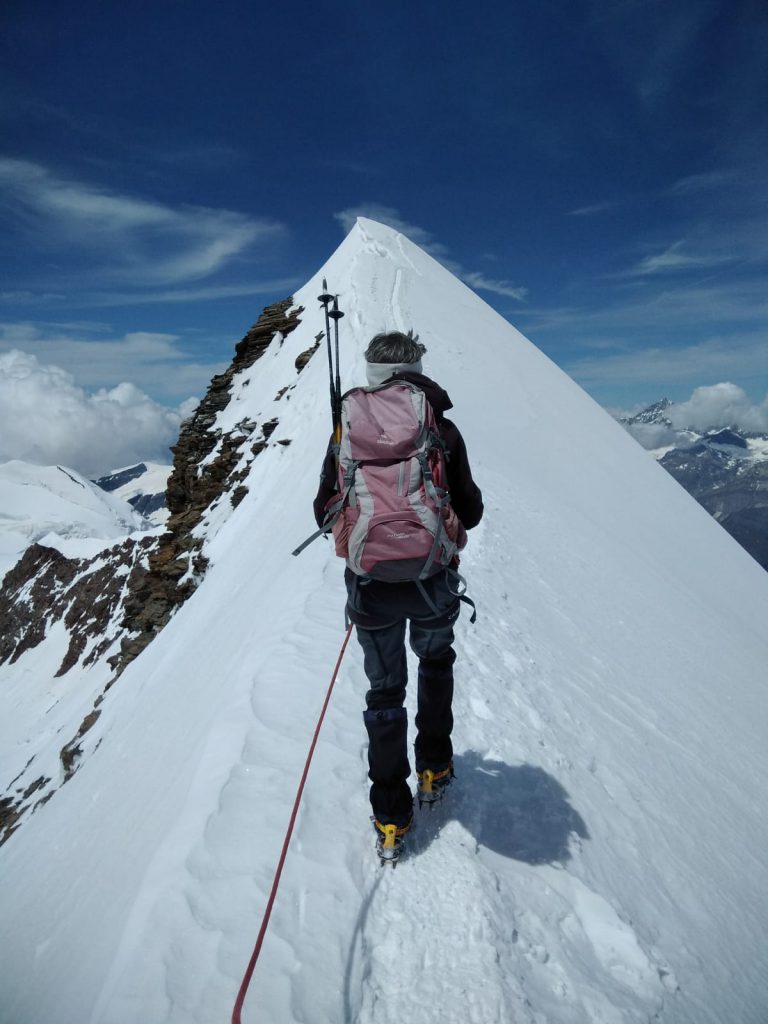 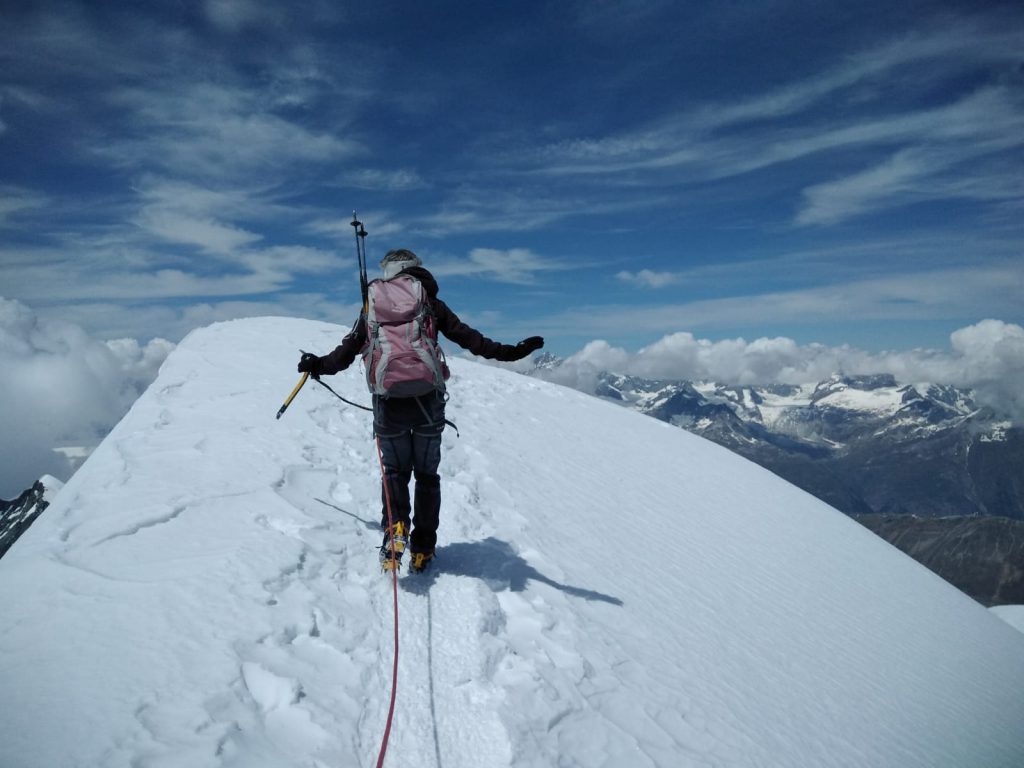 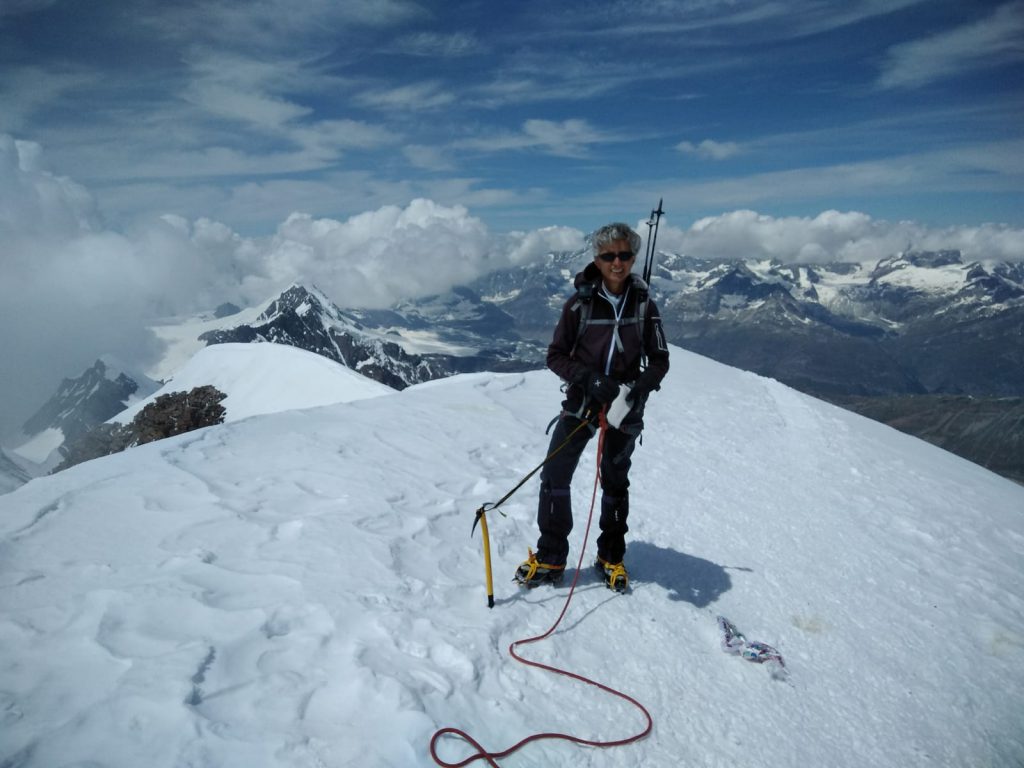 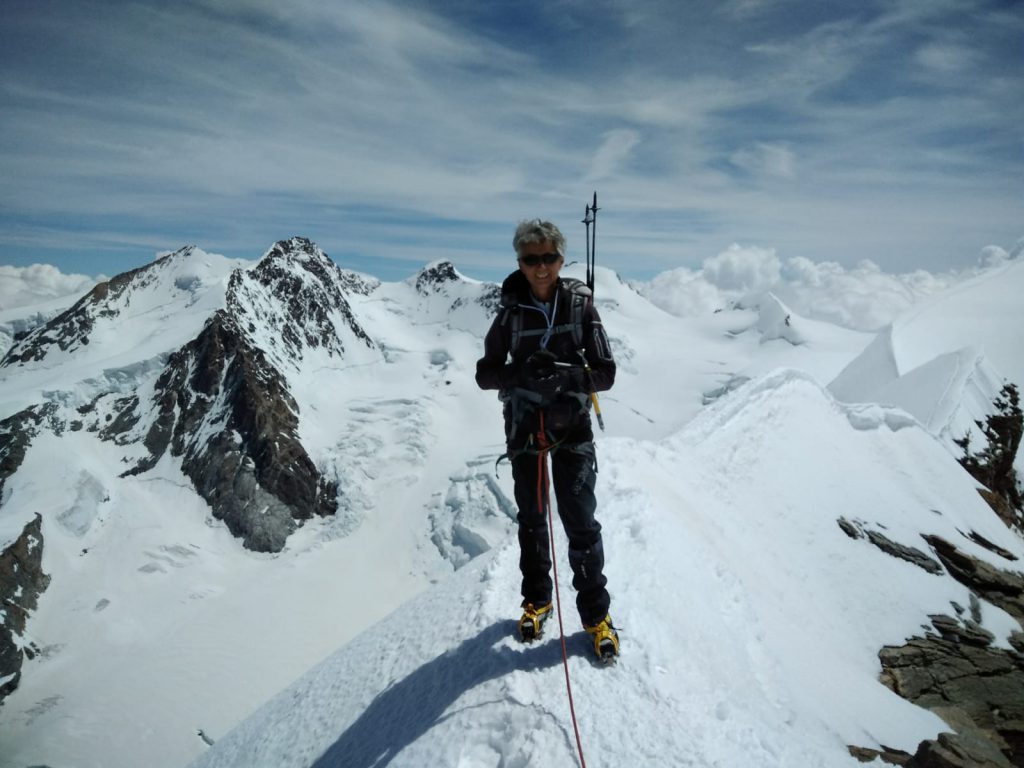 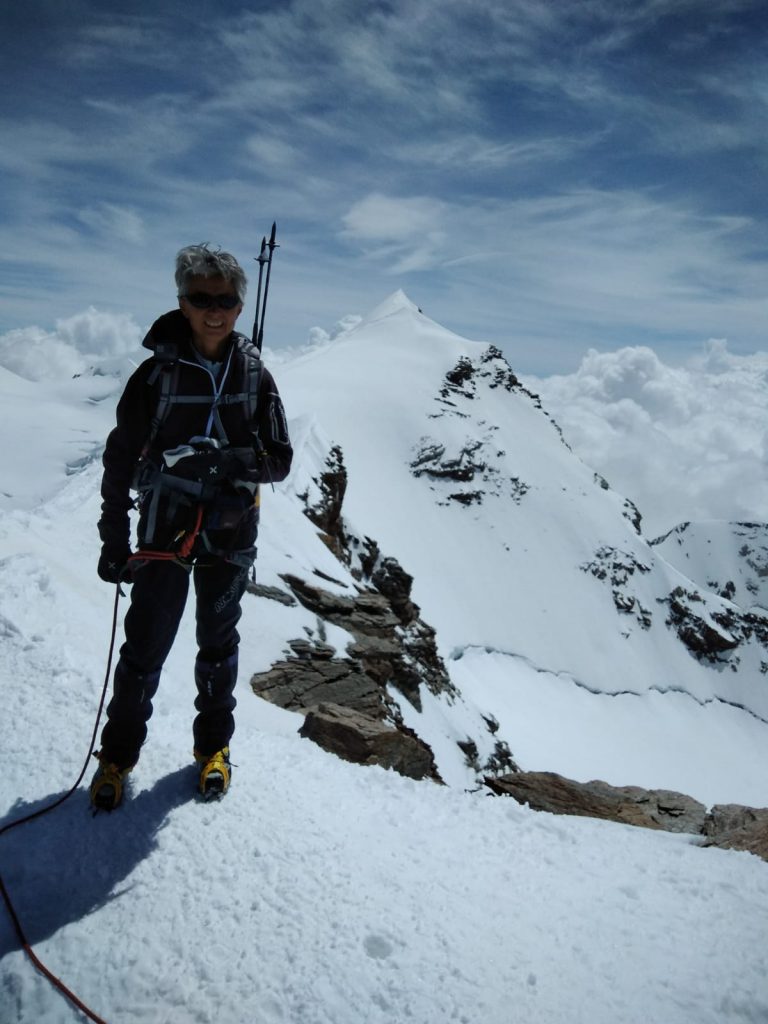 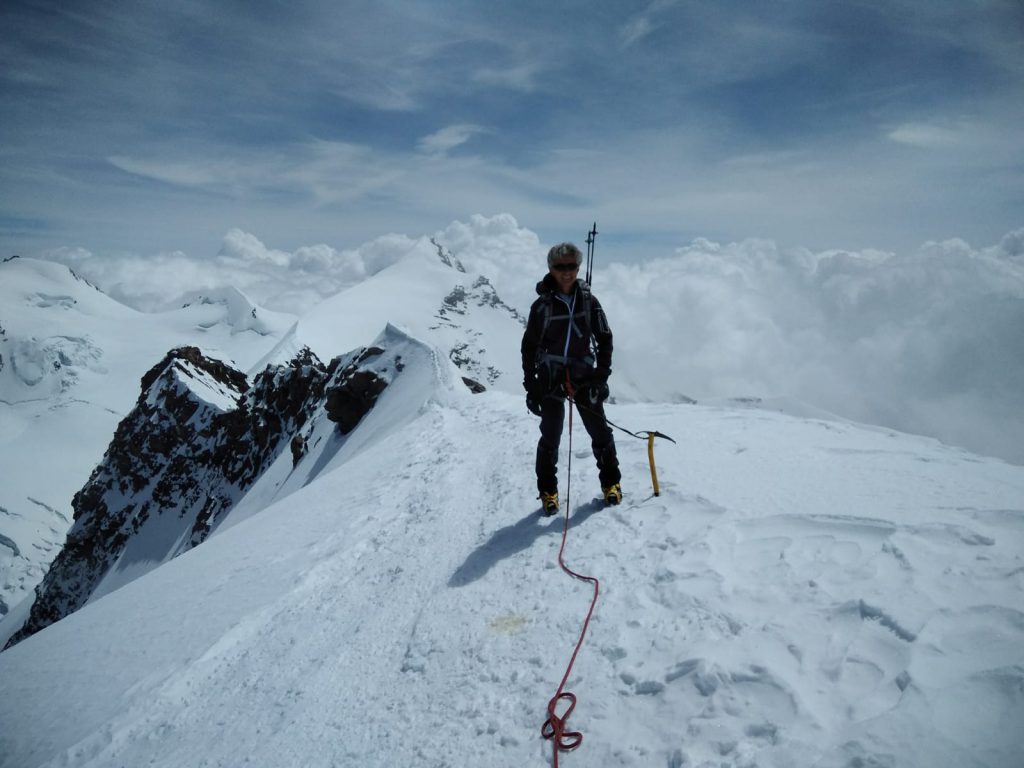